The power of reaching out for help – Tony’s story

For Tony, being part of the police force meant being part of something special – a unique group of people who offered him camaraderie that he still misses. The positives of the job were significant, but eventually the other side became overwhelming. Over time it became abundantly obvious he couldn’t do it anymore.

Within the first few years of his career, Tony experienced several traumatic events. At one stage, he was held at knife point by a man threatening to kill him. At another, he was left trying to restrain a man in the back of an ambulance who had been injured with a machete. While attempting to hold the injured man, Tony got covered in blood. The paramedic told him to be careful as the man was positive for Hepatitis C.

But the incident that had an irreversible impact was when he was first to arrive at a car accident and held a 13-year-old boy in his arms for over an hour, trying to keep him conscious as rescuers worked to free him. The driver of the car had died on impact. Tony had a son the same age and as the boy asked, “Am I going to die?” Tony promised that he wouldn’t. It was a promise he couldn’t keep. 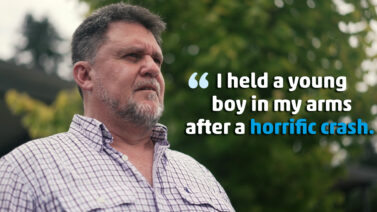 For Tony, being part of the police force meant being part of something special, a unique group of people who offered him camaraderie that he still misses. The positives of the job were significant, but eventually the other side became overwhelming. Over time he realised he couldn’t do it anymore.

He stopped sleeping and began to experience what he describes as “The accumulated effect of the horror that [he] had seen, but also the damage that had been done physically. It was wearing [him] down.” The mental and emotional toll was compounded by his physical injuries sustained on the job, undergoing multiple surgeries.

That was the point at which he called Law Partners. “Talk about client care with Law Partners, let me tell you, it is everything,” he says. Tony knew that someone had his back, someone he could talk to at any time about his case. Beyond that, even. “They’ve proven to be my friend too,” Tony says, “I could still call them today, any one of them, and they’d talk to me not as a client but as a friend.” He says he can’t fault the care he received.

Life is looking stable now. His children are the most important thing to him in the world and he’s enjoying spending more time with them. He has begun compiling historical books, taking satisfaction in the enjoyment they bring to others. Down the track, Tony wants to help people who have been through what he has. He is determined to continue making a positive impact on others.