The circumstances that lead you down the path of having to make a total and permanent disability claim are always difficult. You may be doing your best to support a family and coming to terms with no longer being able to work in the field you’re trained in, all while battling serious illness or a debilitating injury.

The reality is, no two situations are ever the same but reading through real-life TPD claim success stories can be an effective way to prepare you for the claims process, help you avoid crucial mistakes and illustrate just how impactful a TPD payout can be in helping you get your life back on track.

And so, we’ve compiled three TPD claim stories featuring clients we’ve had the pleasure of assisting, to hopefully provide you with some guidance.

Many of our TPD claims stories involve work injuries. James, 42, suffered a broken back when he fell off a scaffold on site. Four years earlier, he had lodged a CTP claim and received a payout after dislocating his shoulder in a car accident.

Law Partners handled his workers compensation claim and arranged for an independent medical assessment to determine the extent of his injuries. It was determined that James would never be able to work as a laborer again due to the permanent damage in his back, which significantly restricted his movement and lifting capacity.

James’ solicitor David, advised him to send through his superannuation statements as there was a good chance he would be entitled to a lump sum TPD payout through his policy. James had heard of TPD cover before but was under the impression that because he had received a lump sum payout for a previous claim he wasn’t eligible to lodge a TPD claim. David assured James that this was not the case, and after examining his statements he discovered three separate superannuation policies with TPD cover that had been set up through different employers.

David successfully pursued all three claims for James which resulted in over $500,000 in lump sum compensation.

TPD claim stories that involve serious illnesses are heartbreaking, but we take pride in being able to at least provide some financial relief to our clients. Georgia, a bubbly mother of one re-commenced work in retail 18 months ago. The 24-year-old had previously worked in retail in her teens but was forced to stop at the age of 17 when she fell pregnant and gave birth to her daughter.

Georgia was really enjoying working again but for a few months, she had been feeling constantly felt weak, tired, and had trouble swallowing. Her symptoms were getting worse when her doctor referred her to a neurologist. Unfortunately, Georgia, despite her age, was diagnosed with Motor Neurone Disease.

Things escalated quickly, she was soon forced to stop work and had to rely on a motorised wheelchair to get around. The reality of how she was going to support her daughter in the future soon set in before a friend recommended she contact Law Partners for advice on a potential TPD payout.

Georgia had no idea about TPD and became really skeptical when she found out it was related to her super policy because Georgia knew her two super accounts had less than $1000 in them – which she assumed couldn’t result in much of a payout.

Despite Georgia’s assumption, her friend convinced her to call and she was put in touch with TPD specialist Quanita, who immediately informed Georgia that her low account balances would not impact a potential payout as long as the premiums were paid. A surprised Georgia quickly sent through her super statements to Quanita who confirmed she was eligible for a TPD payout on both policies.

Quanita took care of Georgia’s two claims and eventually informed her that she would receive a TPD payout of over $650,000. 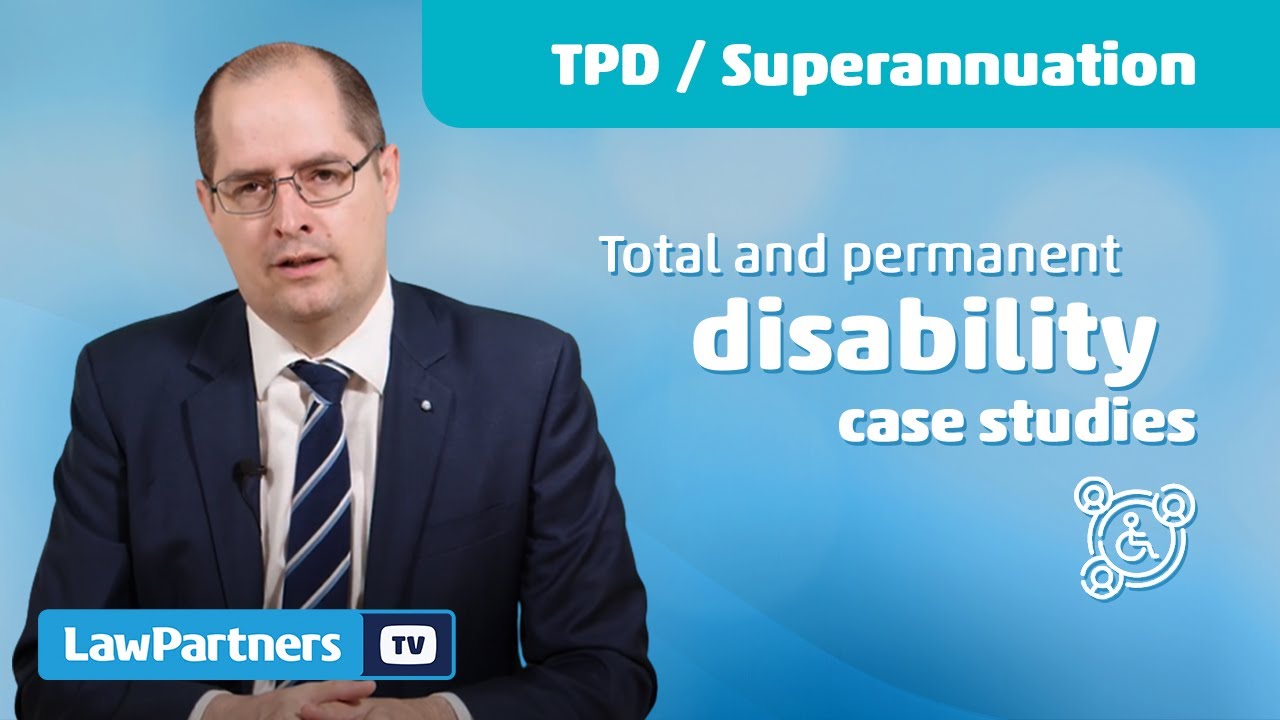 TPD claim success stories like Sandra’s are a great example of why we do what we do. Sandra, 38, was involved in a serious car accident and unfortunately suffered a compound fracture of her leg. Despite a number of surgeries and extensive treatment, the injured leg wasn’t healing and Sandra’s medical team highly recommended amputation as the best possible treatment option. After much deliberation with her family, Sandra agreed and the amputation of her injured leg was performed.

As is the case with many amputees involved in serious car accidents, Sandra developed Post Traumatic Stress Disorder. This mental illness combined with her serious physical disability made it virtually impossible for Sandra to return to work as an admin assistant.

Sandra knew about TPD and decided to pursue claims on her two superannuation policies with the same fund. She thought about engaging a specialist solicitor but opted to do it herself because she assumed it would be a straightforward process since her injuries were so severe.

Despite adhering to the claims process, the insurer denied her claims on the basis that she failed to submit enough medical evidence supporting her psychological injury. They concluded that her serious physical disability wouldn’t prevent her from continuing to work in the field of administration.

A dejected Sandra thought that decision was final. Fortunately, her mother contacted Law Partners, who had successfully handled her CTP claim, and put her in touch with TPD specialist Mark. Mark informed her that a declined claim is by no means the end of the road, as Law Partners has overturned hundreds of declined TPD claims. After listening carefully to the situation, he advised that with his guidance, Sandra had a strong chance of overturning the decision.

Sandra’s mum informed her daughter of her conversation with Mark and she was happy to proceed. Mark immediately arranged for Sandra to be assessed by an independent psychologist, completed a thorough application on her behalf, and wrote a submission to the super fund outlining why Sandra’s claim should be approved. Given his vast experience, he also had a unique understanding of the fund’s needs and requirements, which certainly strengthened the application.

In just a few months, Mark had managed to overturn the insurer’s decision and Sandra was rightfully awarded an $800,00 TPD payout on her two eligible superannuation policies.

If you’re unsure about whether you’re eligible for a TPD payout or need help with your claim, there’s no cost to have a chat with a TPD lawyer. Call Law Partners on 13 15 15 for free advice today – we’d love for your claim to be one of our TPD claim success stories. If you’re looking for further reading, try our Superannuation TPD Claim Guide.

A lot of people have their TPD claims rejected by insurers, even when they do have an eligible claim that should be approved. In this guide, we take you through the seven steps to successful […]
Read article

If you’re unable to work due to injury or illness, you might be able to claim a total permanent disability insurance (TPD) payout. Most Australians have TPD insurance through their superannuation funds, although many are […]
Read article

Can You Work After a TPD Payout?

There are some situations where you can return to work after a TPD payout. For example, if new medications or rehabilitation techniques become available, and that results in an improvement in your condition, you might […]
Read article